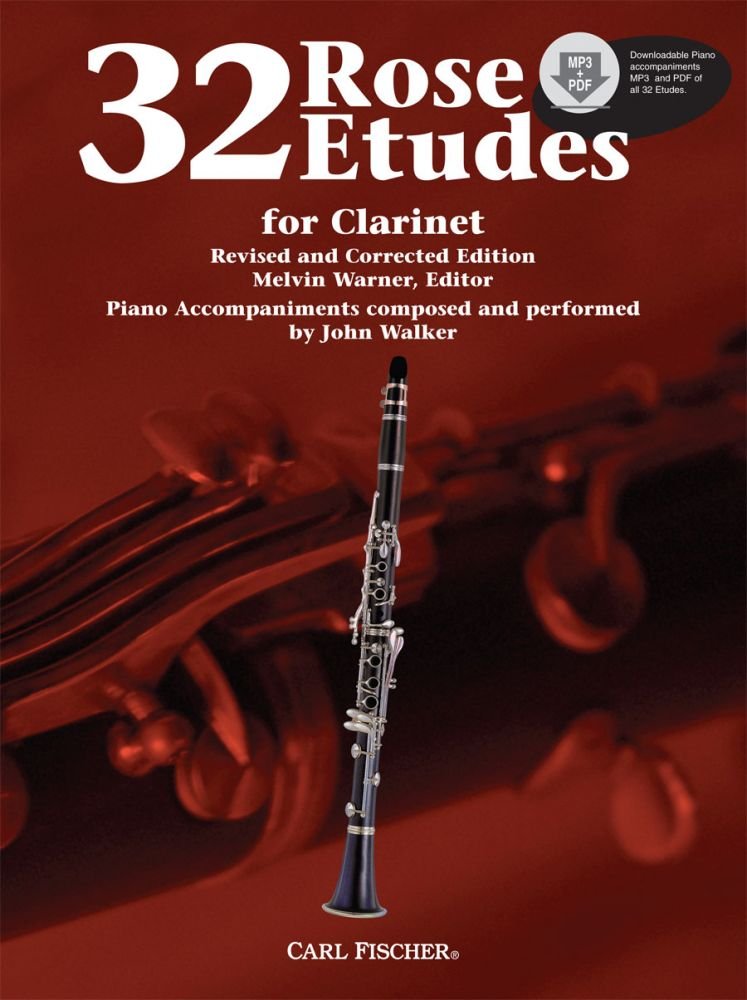 Woodwinds clarinet in B-flat, piano
Revised and Corrected Edition. Composed by Franz Ferling John Walker. Edited by Melvin Warner. Arranged by Cyrille Rose. SWS + CD on cover 3. Back To School. Cyrille Roses 32 Etudes for Clarinet based on the etudes of Franz Wilhelm Ferling continue to be the cornerstone of clarinet instruction and study in the United States for advanced students from high school through college. Daniel Bonade was a key figure . Book with download. With Standard notation. 36 pages. Carl Fischer Music #WF85. Published by Carl Fischer Music (CF.WF85).

Some of the most celebrated musical etudes for the clarinet are presented here in a newly engraved, meticulously edited edition. Clarinetist Melvin Warner brings a careers worth of performing and teaching insight into these standards for the clarinet repertoire. This edition also contains valuable insight into both the original author Cyrille Rose and Franz Wilhelm Ferling, on whose music the Rose studies were based. Also, this edition corrects the mistakes of all previous editions. As an added bonus, this edition contains piano accompaniments, composed and performed by John Walker, as both MP3s and printable PDFs. These accompaniments enhance the musical quality of these etudes while making practice and performance more meaningful. Many of these beautiful pieces can now be used in recitals, as well. With this publication, the clarinet player has a complete and versatile package of these essential etudes for study, performance and sheer pleasure.
Cyrille Roses 32 Etudes for Clarinet based on the etudes of Franz Wilhelm Ferling continue to be the cornerstone of clarinet instruction and study in the United States for advanced students from high school through college. Daniel Bonade was a key figure in popularizing the Rose Etudes in the United States. Bonade studied with Henri Lefebvre, a pupil of Cyrille Rose at the Paris Conservatoire, and was recruited by Leopold Stokowski to join the Philadelphia Orchestra, where he served as principal clarinetist from 1917 to 1922 and subsequently from 1924 to 1930. Bonade later filled the same position in the Cleveland Orchestra from 1933 to 1941. During those years, he taught at the Curtis Institute and the Juilliard School, and became the most influential clarinet teacher in the United States. Bonade used the Rose Etudes as a primary source for instructing his students in the development of proper phrasing, tone, style, and articulation. His students included many clarinetists who later became master teachers in their own right, such as Anthony Gigliotti, Mitchell Lurie, and Robert Marcellus, to name only a few. When I began the serious study of the Rose Etudes with my teacher Dominick Fera, we spent time fixing various etudes and correcting misprints, such as incorrect time signatures, a wrong number of beats in a measure, and questionable notes. Later, when working with students of my own, additional errors or inconsistencies were identified that required further editing. In order to save valuable lesson time, I decided to prepare an edition for use by my students that incorporated all of these corrections. During the process of preparing this edition, I consulted all of the available versions of the Rose 32 Etudes and the Ferling 48 Etudes, Op. 31 for oboe or saxophone, which were important sources for determining correct notes, articulations and such like. It is sincerely hoped that the end result will be helpful to students and teachers alike. Breath, tempo, and other markings have not been added so that decisions regarding phrasing, tempo, and style may be gleaned from the study of the individual etude using only the markings provided by Rose or Ferling as a guide. I would like to dedicate this edition to my teacher, mentor, and friend Dominick Fera.